Home » About Us » The History of Our Congregation

The History of Our Congregation

On this page, you will find several old photographs,

as well as a written history. 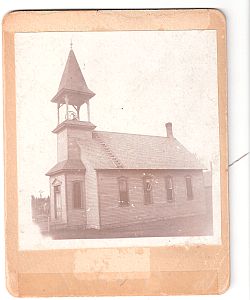 An old sepia-tone photo of the original church building.  A frame building was constructed by the Methodists in 1885 and purchased in 1887 by the Congregationalists.  This building was located at the southeast corner of First and Division Streets across the road from the present church building.  The approximate date of this photo is around 1887. 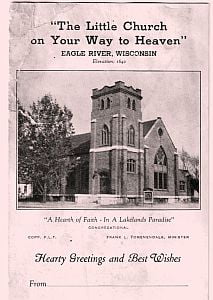 A postcard from 1939 welcomed visitors to “The Little Church on Your Way to Heaven”. 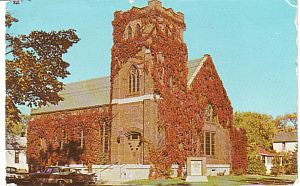 A postcard from around 1960 shows a view of the present church building without the educational wing to the east (right side of photo)…and covered with ivy!

After the railroad came to Eagle River in 1883, families began arriving and a real settlement was developing. These first pioneer families realized there was a great need for establishing educational and religious facilities in the new community. The first religious services were organized as Sunday school classes led by a male congregation member and held in the settlers’ homes, businesses, the school, town hall, or Opera House. Itinerant pastors and priests of various denominations also traveled by foot, wagon or train to bring “The Word” to the small congregations.

As the congregations grew, they made plans to construct their own houses of worship and these churches became a community effort and enterprise.

The O’Connor family, who was of the Catholic faith, donated the land on which the first three churches were built in Eagle River. The Methodists built the first church in 1886 on the corner of First and Division Streets. They weren’t able to maintain it and sold it to the Congregationalists. (It is interesting to note that there never was another Methodist congregation in Eagle River.) The early churches were the center of religious as well as the social life of the community. The settlers looked to their new churches for guidance, comfort and support.

The following article is the history of the local Congregational Church as it came into existence in Eagle River.

The town became a bustling lumber town with saw mills, lumberjacks, saloons and the merchants that served them all. Around 1890, when the Rev. H.C. Todd arrived, weekly prayer meetings were organized and a reading room was set up for “boys, strangers and men without work and in need of a place to stay” and was maintained for seven years.

The first building was erected by the Methodists, sold to the Congregationalists for $200.00 and served as the church until 1924 when the present structure was built. The original church became the parsonage and continued until 1985 when it was sold and moved to another location. From that time on, the pastors have been given a rental stipend.

In July 1965, groundbreaking ceremonies were held for a new educational wing and the cornerstone laid in October of that year. Dedication of the R.W. Newell Educational Unit was held in May of 1966. Just prior to 2000, that wing was enlarged to include new pastoral offices, a music room, conference room, additional spaces in the basement and an elevator.   Making the church building physically accessible was a priority for the congregation.

The United Church of Christ

For a short time, the congregation was yoked with the Community Church of St. Germain and shared a pastor. First Congregational United Church of Christ of Eagle River has also joined with other local congregations of various denominations for ecumenical Good Friday services for many years. From time to time, a Floating Chapel on the Chain of Lakes, a coffee house and many other community efforts have been co-sponsored with other congregations.

Other Organizations Within the Congregation

This congregation has always been an active organization. Barely had it begun before the women got together to form the Ladies Aid Society. By 1907, they became the Earnest Workers and in 1931 the “31 Club” branched off on their own. These ladies labored long and hard for over fifty years for the good of the church. In 1955, the Women’s Fellowship was formed and still exists today. In addition, there have been many youth groups, a Men’s Fellowship, Men’s Breakfast Club, Couple’s Club and others.

Pastors of the Congregation

Pastors who have served First Congregational United Church of Christ of Eagle River as senior or solo pastor:

Over the past 120 years this church has been served by twenty-two pastors, dedicated members and friends. Much has been accomplished by this congregation but the work is never done. The church will continue in the example set by its founders, pioneers, pastors and member through devotion, vision, faith and love.

Other Remembrances and Recollections of the Congregation

A recollection from Mort Cook:

Every summer the Congregational Church Sunday school held a picnic, and those picnics were really something. It was practically a holiday, and about half the town attended, regardless of church affiliation. The Gerry Lumber Company donated the services of the “Eagle,” also a team and wagon to haul barrels of water, food and ice to the scene of the picnic, which was usually held on the north shore of Eagle Lake. Mr. Kinney would bring a 50 gallon cast iron kettle from which he would serve hot maple syrup. Some of the ladies baked biscuits on a large range brought along for that purpose. Everything was free!

History of the Churches in Eagle River as told by Ed Drager in 1987 at the Centennial Celebration of the Congregational Church:

When I was a youngster we had three churches in the area. There was the Lutheran Church which was situated on the site of the Christian Science Church today. And a Reverend DeYoung was a Preacher at Rhinelander that used to come over every two or three weeks and hold services in the Lutheran Church. The Catholic Church was located where the First National Bank is now. Father Toplac was the Priest at that time. The Congregational Church was situated across the street to the south. Reverend Todd was the Minister.

Now those stand out in my mind as a youngster. I remember those three churches and I remember the people that had ministered to me.

H.C. Todd was a minister at the Congregational Church. I met him and he had a bunch of land down on the Wisconsin River. We used to go hunting down there and we used to call it “Todd’s Place.” As a matter of fact, the land where Francis Johnson has is the land owned by Reverend Todd. Ministers didn’t do so bad then—they were land owners.

Henry Clay Todd was Pastor of the Congregational Church from June of 1892 until April 1900. When he came to Eagle River he wasn’t 25 years of age. He was ordained in Pittsville in 1883. He was born in Newark, New Jersey, in 1857. Reverend E.C. Newcomb labored long and hard prior to H.C. Todd coming to Eagle River.

Reverend Todd’s nickname was the “Lumberman’s Preacher.” He started the Reading Room in the old church that used to be across the street from the present church. Remember, Eagle River was the end of the timber flow. Large numbers of men landed here. Along with them came the “winter?” brawls. They lived a riotous life.

And so the Reading Room was a shelter for lumbermen. The Gospel was available in books and magazines. Also available were job descriptions for lumbermen, and locations and letters from Logging Camps. Families were able to come here to find where loved ones were. This is because once you entered a camp, you were lost per se.

The Reading Room was also developed into the “Jail Room.” When wild lumbermen got thrown out of the saloons, drunk and helpless, they were brought here. They stayed until they sobered up. This stay kept them safe also from losing their paychecks!

Reverend Todd was also the first Chamber of Commerce organizer. It was called, “The Advancement Association.” New home seekers to the Northwoods could inquire here as to the availability of property to buy.

Also he promoted the Northwoods by taking the first two exhibits on Vilas County to the state fair in Milwaukee. This demonstrated to the public about the possibilities of our area. Doing this proved very worthwhile.

Around the turn of the century this church grew to have a position and power in the Northwoods with the help of the Eagle River and Rhinelander newspapers.

Unfortunately, H.C. Todd left the church in financial despair. In 1896 he made $780 a year. The church had a meeting with Reverend Todd over the finances. The Committee included L.J. Cook. A. G. Recision, Mrs. May Voight. “W.H.” Carter was helpful in aiding and setting this matter free. The agreement was for H.C. Todd to depart. He moved to Minnesota upon health advice from his Dr.